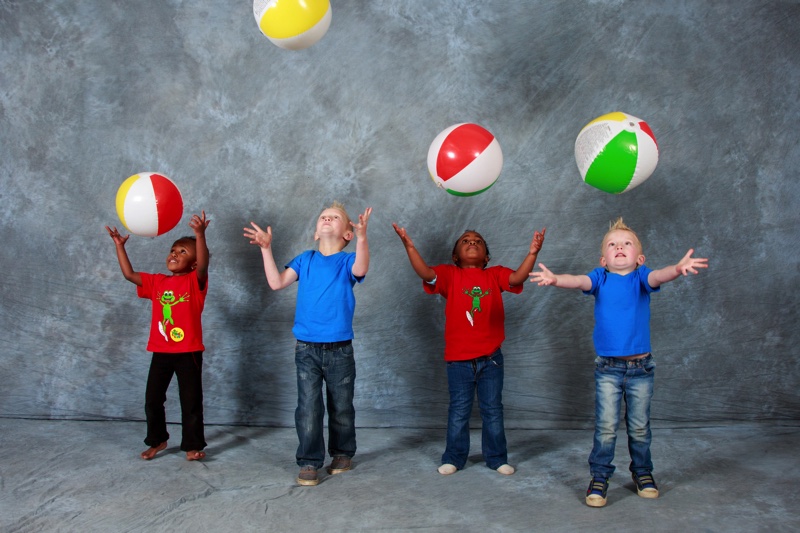 Despite all of my tools for keeping winter bugs away I suppose it is inevitable that one or more of the children is going to get sick. My youngest has unfortunately always been prone to ear infections. Her very first one was picked up at her routine 6 month check up (she doesn’t get temperatures for ear infections making it all that more difficult to pick up) and her ears have been non-stop trouble ever since. So, when she had hit her 8th ear infection in pretty much as many months it was time to head off to the ENT. After a thorough examination it was decided that as her ears were currently clear (after a course of antibiotics, nose sprays and antihistamine) that we would wait for the next infection and decide on a final course of treatment then. We had a blissful 2 month period however autumn turned to winter and her ears took another hit and so we decided that it was time for the inevitable.

Now, I am aware that grommets aren’t always the best option and there are many cases where they don’t work (I was one of them) however I hated the thought of putting her on yet another course of antibiotics and so after weighing up all the pros and cons and talking the procedure through with our paediatric ENT we decided that this was the best course of action for us.

Fortunately we had less than a week to wait for our surgery and after all of our information from the ENT and some consultations with Dr Google we felt as ready as we could be for the procedure.

For those who are lucky enough to have never needed to consider these little plastic rings a grommet is a small tube (about 1.5mm small) that is inserted into a small incision in the eardrum. What this does is it helps stop the build-up of fluid in the middle ear by allowing it to drain out. This build up is what can lead to an (or in our case many) ear infection. It is a fairly quick procedure and while it is performed under anaesthetic it doesn’t require an overnight stay. If you want more technical information you can find some here.

My little one seemed cheerful enough when we arrived at the day clinic and got stuck into the giant Lego blocks in the children’s ward immediately. This was a relief as she wasn’t allowed to eat or drink anything so I was expecting a rather cranky baby. 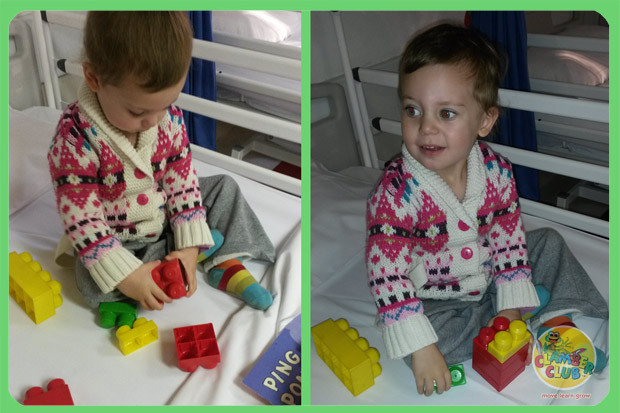 The difficult part came when I had to take her through to theatre and hold the gas mask over her face to put her under. I am grateful that I had to hold her and do it myself as I think it was probably a lot less distressing than if she had been wheeled off while she was still awake. It was not less distressing for me! It was absolutely awful having to hold her arms so she didn’t pull the mask off and feel her squirming away from the smell of the gas. I managed to hold it together while she was still awake but after leaving her lying on the table, fast asleep, I have to admit that I broke down and bawled my eyes out!

I am extremely grateful that (touch wood) this has been the only experience of this kind that I have had and I know that there are parents out there who have had to endure repeated surgeries on their children. It is not an experience I wish to repeat.

Fortunately everything went well and after a short nap my little one woke up happy and hungry and off we went home. The whole thing took 3 hours. 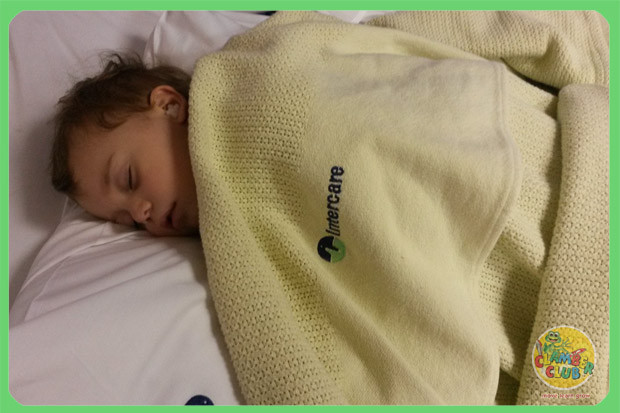 Sleeping off the anaesthetic.

If your little one needs to go for grommets I would recommend:
• Discussing the procedure thoroughly with your ENT before the surgery. Make sure that you have all the facts and know exactly what they are going to do and in what order. Knowing why the procedure takes a certain amount of time and what could delay it really does help.
• Prepare yourself. I thought that knowing all the facts would make me braver and not cry, it did not.
• Take some small snacks. When your little one wakes up she will probably be hungry but it is best not to feed them something too big. I took along some yoghurt, mini muffins and biscuits as well as some juice. The day clinic also offered us some ice cream which my little one thought was great, yay for ice cream for breakfast.
• Take along some books for both of you. For your little one to keep busy while she is waiting to go in and some for you to read while you are waiting (it makes the time go by faster).

All in all although it isn’t something I would like to repeat, I have noticed a difference in my little ones speech (she can pronounce words far better) which has a lot to do that with the fact that her ears aren’t constantly blocked. We have also (so far) had clear ears, yay.