Finger painting for the different ages

One thing is for sure, that when I mention a creative activity to my children, they both get super excited. However, with their different ages, I sometimes find it difficult to come up with an activity that is suitable for both. Bailey is 6 years old and Benn will soon be 2 years old. I find if the creative activity is fun for Bailey, it is too difficult for Benn to really get stuck in and if it is age appropriate for Benn then Bailey is bored within 5 minutes.

So the idea of finger painting for both their ages worked like a charm. For Bailey, we used the conventional finger paints that you can get from most shops and for Benn, I took one tub of his full cream yoghurt and added two different food colourings to it, to make the different colours and he painted with his yoghurt. Every now and when Benn stuck his finger in his mouth, I didn’t have to stress about him eating paint but rather knew that it was yoghurt and thus not harmful to him.

I really enjoyed watching the children during their painting session, they happily chatted to each other while painting. Bailey told Benn what she was painting and what colour she was using. She would then ask him if he knew which colour she was going to use next and whichever colour he said, she used, this in turn putting a smile on Benn’s face. This was lovely to watch as she was giving him new vocabulary and he was also observing the colours she was using, teaching him his colours at the same time. Benn also enjoyed mixing his paint colours and creating a third colour. He would then tell Bailey, ‘Mixing Bailey, me mixing’. The bond the two of them have is amazing but it is so lovely as a parent to stand back and see them showing an interest in each other’s creative activity and positively motivating each other that they are doing a great job. 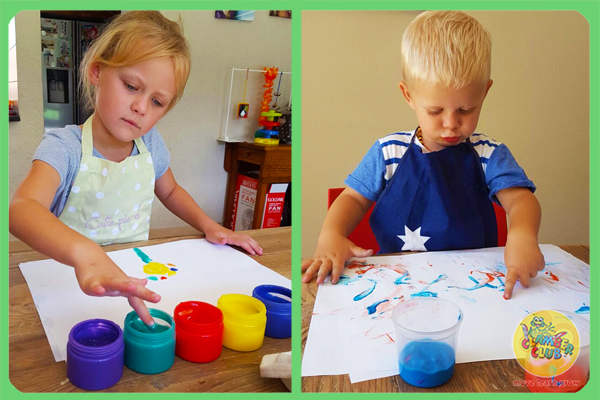 Finger painting incorporates a couple of skills and so while the children were having fun, I knew that they were also stimulating some fundamentals: 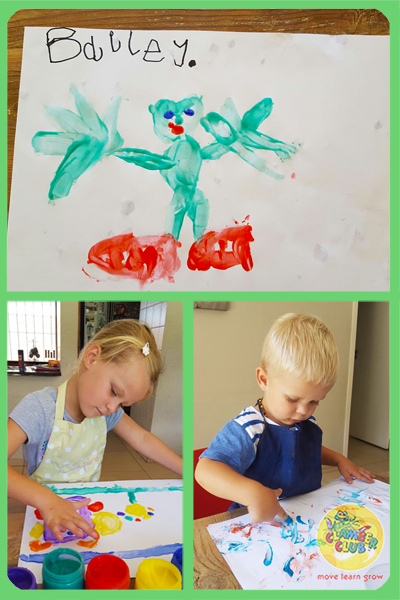 I really recommend you try this at home with your little ones, as you don’t need anything fancy but simply things you have in your kitchen cupboard. Set it up for them, step back and enjoy watching them have fun… fun that is messy but at the same time so easy to clean up!