Basic Skills Board
This wooden bear is always smiling, but he’s happiest when fully dressed! Getting dressed won’t be such a puzzle once zipping, buckling, snapping, lacing and tying, and other dressing skills are mastered. Each skill is contained on a separate, wooden puzzle piece for easy practice. Develop fine motor and life skills with this great activity.

My little ones really enjoyed ‘dressing’ up their bear and although some of the buckles and clips required a little more practice, it didn’t deter them from trying and kept them both happy and busy. What was an unexpected but welcome outcome with both children is that now when they get dressed in the morning they like to help out a lot more (although this isn’t always ideal when we are in a rush and late for school).

Doorbell House
Toy of the Month – Melissa and Doug Doorbell House Ding Dong! Fun is at the door of this soundly-built wooden doorbell house. Four electronic doorbell sounds, four unique locks with matching keys, and four pose-able play people are included with this charming cottage! The keys are attached to the house so they won’t get lost, and the sturdy handle allows this exciting house party to go wherever children go! 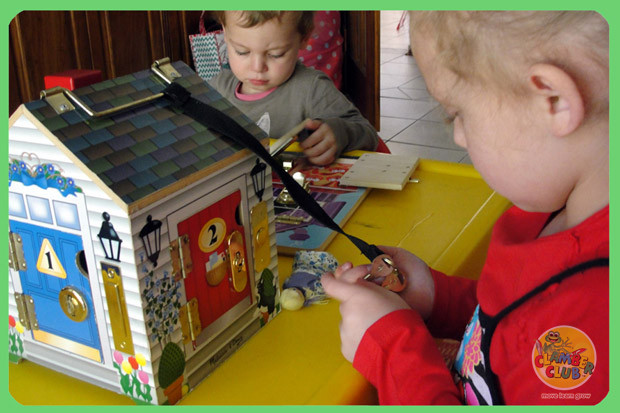 My eldest daughter thought Christmas had come early when I gave her this toy to play with! She had a ball opening all the doors for the first time and finding a little doll in each ‘apartment’ and then spent ages swopping them round, pretending that they were visiting each other and then saying goodbye and returning them to their own homes. What I didn’t realise when I first saw the house is that the keys have two different ways of identifying which one opens each door. First, each key is shaped a different way (a straight end, a square end etc…) and then each key also has a number that corresponds with the door. The shapes really helped with my daughter’s visual discrimination skills and the number differentiation has helped to build on what my daughter had already started learning at school. Now, when we drive down the street she enthusiastically calls out ‘that is a number 4 house and a number 2 house’. 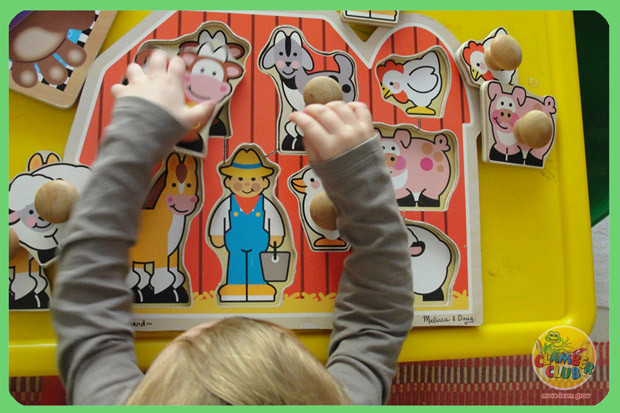 As with the doorbell house, this puzzle was Christmas comes early for my 2 year old. She absolutely LOVES puzzles and her interest in this one far surpassed any of her other puzzles. While she has other ones that have colour matching pictures the chunky pieces and large wooden knobs made it much easier for her to complete the puzzle and so instead of getting frustrated and moving on she wanted to do it over and over again. We started repeating the animal names and sounds too and so not only were we building on her hand-eye, fine motor and perception skills but also her animal recognition and speech development. A very real winner!

Latches Board
Undo a lock or latch, swing open the numbered door and count on finding fun when the picture beneath is revealed on this wooden play board and educational toy! Build fine motor skills while learning colours, numbers, animals and more!

My children first encountered this toy in the paediatrician’s office and were immediately hooked. This board is a real winner and whoever invented it is a genius and there is something on here for both of my little ones to get tucked into despite their almost 2 year age gap. For example my eldest loves counting the number of animals behind each door and naming the colours and my youngest loves making the animal sounds. And then the latches themselves are something that both of the children enjoy!